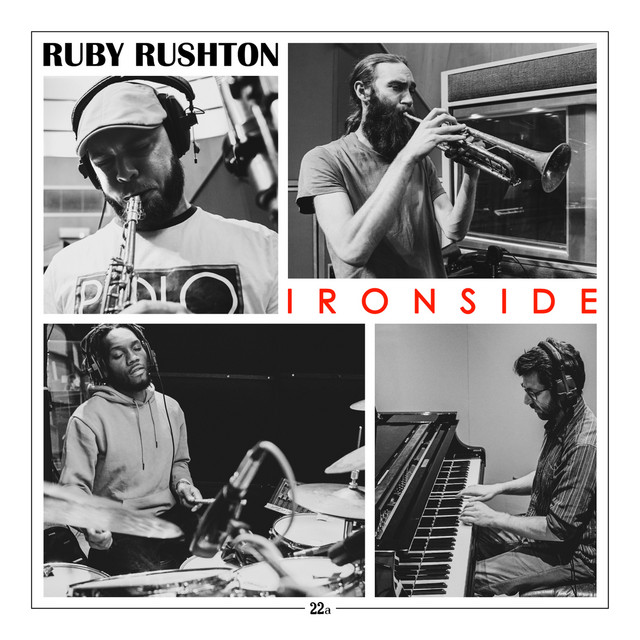 Ruby Rushton are a London-based jazz outfit led by multi-instrumentalist, producer, and 22A label boss Tenderlonious (Ed Cawthorne). They are at the spearhead of South London’s 21st century “new jazz” movement, playing a highly original meld of Yusef Lateef- and John Coltrane-influenced modal post-bop, soul-jazz, Afro-beat, and Latin grooves often melded to funk, electronica, and hip-hop. Its somewhat fluid membership has circled around, from a quartet to a septet and back again, over a series of albums and singles that began with 2011′s widely acclaimed Two for Joy. The group’s core lineup has remained consistent with Cawthorne on flutes, saxes, percussion, and synths, trumpeter Nick Walters, and keyboardist Aidan Shepherd. Though initially a jam- oriented outfit on their debut offering, they developed into a band that relies on tight arrangements as much, if not more than, improvisation, as evidenced by 2019′s Ironside.

The origins of Ruby Rushton date back to Cawthorne’s personal musical development. As a young DJ, he had often sampled jazz, particularly the music of Lateef, whose equanimous global approach appealed to him. Almost entirely self-taught, Cawthorne began playing soprano saxophone in 2007 after seeing one in a music shop window. He hooked up with musicians he had met at Goldsmith’s University (he took only a few classes there) in a rehearsal classroom. He named the band Ruby Rushton early on after his artistic polymath grandmother. The lineup changed, the musical direction shifted, but the name remained.

Cawthorne/Tenderlonious eventually encountered Walters and Shepherd. They formed a formal group that began rehearsing and playing live with drummer Yussef Dayes (later of Yussef Kamaal and United Vibrations) as their drummer. They recorded their debut album, Two for Joy. Initially pressed in a very limited edition, it was fueled by its members’ love of Coltrane, Lateef, and Fela Kuti, as well as more contemporary artists such as Slum Village and Sa-Ra. While the band played live, the project took a bit of a backseat to Tenderlonious’ many other projects as a producer, session player, and DJ. After the establishment of his 22A label (named for his address), he formally re-issued Two for Joy in multiple formats in 2015. It gained almost immediate acceptance for its loose, cross-pollinated approach just as the South London jazz scene began to attract national notice. The band played out more and Cawthorne began cutting a series of solo recordings over the next couple of years. In 2017, Ruby Rushton issued Trudi’s Songbook (titled after his mother’s first name) in two separate volumes that featured new drummer Eddie Hick, bassist Fergus Ireland, and percussionist Joseph Deenmamode. The first half’s single, “Prayer for Yusef,” was a nine-plus-minute tribute to Cawthorne’s inspiration and drew global notice. The following year, 22A re-pressed the two parts and issued it as a complete set. Playing in the U.K. and Paris, Ruby Rushton pared itself down to a quartet with drummer Tim Carnegie and released its tight, contemporary jazz-funk set Ironside, prefaced by the singles “One Mo’ Dram” and a cover of Krzysztof Komeda’s “Pingwin” (subtitled “Requiem for Komeda”).

Tenderlonious issued a couple of his own EPs — After the Storm and Piccolo: Tender Plays Tubby (a tribute to saxophone legend Tubby Hayes, played on the late musician’s own piccolo, hence the title) — Ruby Rushton issued the single “Sun Khosi” b/w “Chrysalis.” The A-side was the title track to a forthcoming November 2020 full-length, while the latter drew on the longtime inspiration provided by British jazz giant and pianist John Taylor. ~ Thom Jurek